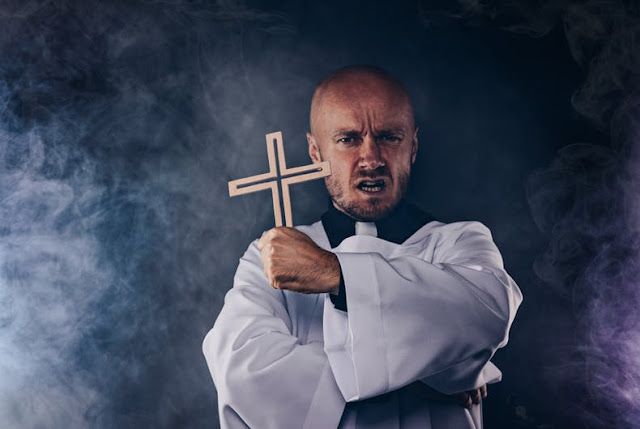 Breaking News: From the unexpurgated Gospel of Matthew:

Then Jesus awakened Peter and said to him, “I command you, tell the disciples I was wrong and Lucretius is right. Preach to them, the good news is, I changed my mind. It is too late for me to tell them.”

Feeling driven to the edge of desperation propels rash actions. In the case of organized religions, we can see how they fight recklessly to destroy secular causes. Some humans believe they “solve all their problems” by killing those they hold responsible for their predicaments; so have religions. And then there are those who choose to die rather than change their minds.

Human desperation is often driven by revenge, by irrational fears and feelings of hopelessness. It is also driven by very ordinary sexual needs. Many will trash their ethics and morality to get what they want. Really desperate people will put in power whatever system or whoever they see as saviors, and sacrifice all they claim to hold in veneration. Desperation is the worst reason to choose a system or individual. A true believer won’t think about: “If you give up control of your mind, someone else will control it.” (Definition of a person denied the right to self-determination of her body: slave.)

Believers who say they “Trust in God,” won’t. Waiting for any deity to do something is fruitless. They trust in mortal saviors. What’s driving them is not religious freedom, but fear of losing power and control. Some other fears: Latinos are entering the country and breeding more children than whites. Gays have rights, just like everyone else. Roe vs. Wade is still the law. Sharia law is threatening to overthrow our legal system. The End Times are at hand. Liberals are communists, etc. Since we’re persecuted, we want the sympathy. Progress has to be stopped – now.

And so they elected someone who’s reversing human progress. (Thank you, Lord!) We must ask these anxious Christians: Do you get your rocks off denying to others the right to their own bodies, and the rights you yourself enjoy? And if this is how your “good news” works, it’s no wonder you’re being rejected. Your tension is destructive to your psychological well-being. Lighten up lest you tighten up and explode. You want to be saintly? “Saints belong in heaven; no one on earth can stand them.” (author unknown). Get to “like” the Life of Brian song, “Always Look on the Bright Side of Life.”

If you grow up in a Christian country, you’re surrounded by Christian propaganda;. And what is its predominant tradition? Well, it claims: There’s a “supernatural” world superior to the reality about us, which is far more important than everything in this universe, and human nature is created to belong to that “other” world. So that’s why you should be discontented with being merely human. And, since sex is everyone’s most intimate experience of the natural world, sex is the enemy of the supernatural.

Christianity and Islam insist we must be better than our sexual urges, and should overcome them. In true fundamentalist tradition, power is in controlling sexuality. This would be funny if it didn’t have serious side effects. For one thing, nobody considers the “religious benefit” for those who hold on to that power: it leaves women who believe in their religious authorities vulnerable and available to them, since they’re trusted “spiritual advisers.” It’s how all cults operate, not just the Christian one.

I will go out on a limb and say the desperations of fundamentalists and evangelicals, as overtly expressed through political action and protestations of persecution and/or prejudice against them, are in actuality the result of sexual repression. And I will add to this, having to live in a society which is becoming increasingly more open to freedom of sexual expression must be especially frustrating to those who cannot participate, either out of fear of censure or damnation. One outlet for hypocrisy in regards to sex: What they are forbidden to do themselves, (such as being a sexual predator with access to beautiful women), they support in a president who will do so in their stead.

If, on the other hand, you are raised in a Hindu nation, things are different. There, sex itself is an expression of spirituality. The Hindu pantheon includes goddesses. Their scriptural Kama Sutra is a manual of sexual positions. Discovered ruins of one ancient Hindu temple have an entire wall covered with bas-reliefs of couples copulating. Men and women grow older and still enjoy sexual intimacy as an expression not only of shared sexual intimacy and needs, but spirituality. So if you had a choice…

If you grow up in a Christian country, you’re surrounded by Christian propagandaAs for Christianity as a guiding lighthouse in a storm: it is self-destructing from pedophilia, adulteries, theft, prejudice and hypocrisy. As it should. Only those who don’t care and want to remain ignoring these facts are still riding things out. This ship of church/state deserves to be sinking with its new captain, who has zero experience with steering either one, let alone combined. He’s a leaking, erratic life raft. It matters not to the desperate, who blame the non-existent secular iceberg for its sinking.

And if that weren’t enough – nobody can explain with logical coherence what “Christian” means; it’s morphed into an old-time braggart badge. On this subject, see: “Wisdom From Strangers,“ Daniel Everett, YouTube. To the “strangers,” a Christian is: 1. Someone who has a personal relationship with a man he’s never met. 2. Someone who knows everything was “created” without seeing it happen. 3. Someone who claims to know there’s life after death, w/o proof. (I’ll add 4. “The world may end tomorrow and you will die, and then what?” Oh please! Is that any way to live?)

I mourn for those who do and will suffer; both the desperately repressed who envy the free, and those they affect by their choices. In a democracy, desperation must be defeated at the voting booths. Desperation, whether to avoid a “Hell,” or out of fear of being punished by just another invisible and silent god in the here and now, is toxic.