How Christians Avoid the Facts that Matter 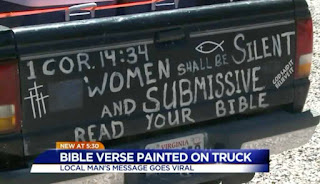 I get TheHumanist.com newsletter in my e-mail regularly. There was a reprint of an interesting article in the latest edition. It was originally published on Stream.org, a right-wing news site. The original article was by Tom Gilson, a senior editor with The Stream. The title of the article was, “Christianity, Women, and How Atheists Avoid the Facts That Matter.”

The article deals with an item that was on a Virginia television station’s news, and the video had gone viral. It seems that Tom Hicks, an atheist, had painted a message on the back of his pickup truck. The message read, “Women shall be silent and submissive 1 Cor. 14:34,” adding, “God said it, believe it,” and “Read your Bible.”

The article’s author, Mr. Gilson, takes issue with Mr. Hick’s message, claiming atheists like him routinely avoid most of the “real” facts. Gilson wrote, “Hicks wasn’t trying to preach Bible truth. According to WTVR, ‘Hicks said the reason behind the verse is because he is an Atheist, and he is driving home the message that the Bible itself is offensive.’ Hicks added, ‘[The Bible] is a hateful, hateful piece of work which Christians try to turn around and they talk about love.’”

Gilson wrote, “Is he right? A scientific, reasoned, fact-based approach — the sort atheists claim to follow — would take all the relevant evidence into account. Hicks chose six words. What would he have to work with if he took a broader view? A lot.”

The author then lays out his argument under several major headings, with examples under each. His first major point is, “The Bible was written in a period when women were routinely, severely, subjugated.” Next, the author claims “Jesus broke the pattern.” As examples, he writes, “His followers included many women; see for example John 11.” And, “Never in the Gospels do you see him talking down to women as inferior. Never.”
The other major headings are, “The apostle Paul broke the pattern,” “The early church broke the pattern,” and, “The Church has continued to break that pattern.”

His last major heading is “Drawing a Conclusion,” which, for your amusement, I provide below in its entirety:

“From this we can safely conclude two things. First, Christianity is certainly not the “hateful, hateful” religion Hicks says it is. A reasonable, fact-based view shows it’s reasonable to think that, in Sue Bohlin’s words, Christianity is ‘the best thing that ever happened to women.’ You might disagree with that, but are you taking all the facts into account?

“Second, Hicks jumped to an unreasonable conclusion — and he’s trying to sell that conclusion — based on a self-serving, biased, misleading, and ridiculously small sample of the relevant evidence. You’re free to disagree with that too, but if you do, you’re making the same mistake atheism makes over and over again.

“This is just one small sample illustrating something I see repeatedly. Atheism claims to be reasonable and fact-based, but too often atheists avoid facts that don’t serve their own purposes.”

I am not much impressed with Gilson’s case. He provides a long, involved argument for why we should not take the holy Bible at its word. Over and over it seems we find Christians telling us in one breath that the Bible is the Word of God, or at least words inspired by god, and in the next they tell us that it really doesn’t matter that much what it says. He claims that sort of extreme misogyny – “women shall be silent and submissive” – should be expected of a document written in those days by those primitive men. So isn’t he admitting that those are not the words of god, or even inspired by a god, and we shouldn’t accept them as indicative of sound moral guidance? But isn’t that exactly Mr. Hicks’ point all along – that you can’t just pick up the Bible and expect to get an enlightened moral message; that you’ll also find hateful stuff that has no place in a modern society, and that the Bible is not the place to go looking for enlightened moral instruction? And isn’t he right?

If Christianity has been so good for women, as the author claims, then why doesn’t the Bible – the Christians’ founding document and rule book for morality – consistently support this argument? A woman’s testimony is worth half that of a man, a female slave is worth half that of a male slave, a woman is twice as dirty if she gives birth to a baby girl, and kill everyone else but keep the virgins for yourselves; the Bible is full of this disgusting, myopic stuff, yet this man thinks we should ignore all these crystal clear words from scripture and just accept Christianity as a moral beacon for the world – on his word. If the Bible is really god’s prescription for humanity, as the Christians claim, then isn’t he the one who is avoiding the facts that matter?

And, as for Jesus’ “enlightened” approach, notice that the author never mentions the Canaanite woman who pleads with Jesus to cure her daughter (Matt. 15:21-28) and gets compared to a dog begging for scraps. And why were there no female disciples? Was it just the times, as suggested by the author? Well wasn’t it Jesus’ purpose to right the wrongs of that age, such as not involving women in anything important? By not including women among the disciples, wasn’t Jesus sending the signal that it’s perfectly respectable to deny women positions of respect?

In the final analysis, if the Bible was really a book of enlightened moral instruction for mankind, that would be obvious to all, and wouldn’t need to be defended. In providing this defense, the author of this article is proving Mr. Hicks was right all along.