I don't know what to do 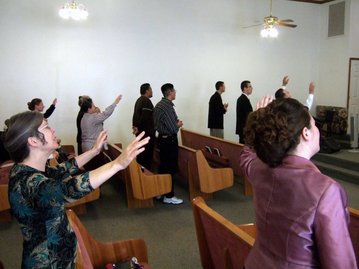 Greetings to all of you! Sorry if my English is not very good, it’s not my native language. So I want to ask you guys to give some advice about my situation. I’m a musician, worship minister in a small Pentecostal church (about 20-30 members). The other members of the group never considered themselves as a musicians and was doing their ministry only because there was no one else who was ready to do it. So when I became a minister, all technical stuff about how to make music not to sound like shit was laid on my shoulders because I was the only one in the whole church who knows how to do it right.

Not so long ago I was came out to my pastor and to other ministers about my non beliefs. After some discussions when they realized that I’m serious about my decision to leave the church they’re have nothing left to say but to ask me not to leave my ministry until a replacement was found for me as a musician. Actually I can understand them, because the rest of the worship team still can’t do good sounding music on their own without me as a director who can tell them about what they’re doing wrong and how to do it right. Of course I was giving them some private lessons about music and stuff, but almost no one of them were actually practicing on their own without me so as a result there was almost no progress.

So in the end, I was told by ministers that despite the fact that they understand my suffering from being in the church, they believe that I will act immorally, leaving the group on it’s own without musical leadership. And because we are actually a good friends I couldn’t say no to them.
So here I am on stage for 2 months after that conversation, singing songs about stuff that I’m absolutely in conflict with, playing music that I don’t like, wasting my time on repetitions etc. And there’s no reason to think that someone could take my place any time soon, because as I sad
earlier there’s almost no one in team who do care about a real progress of their musical skills. And for those few who care, in any case, it will take a lot of time that I will have to spend in the ministry before the moment they will be ready to replace me. It’s kind of trap and it’s hard for me to just stop giving a f**k…

Soon I’m going to talk about it with ministers again. And I’m asking you guys to give me some advice about what actually should I tell them, how to react if they again claim that I am immoral for leaving the team on it’s own etc. I understand that they’re just manipulating me, even if they think that they doing it for good. But I’m just so exhausted that I literally can’t think clearly about that. Every time when I think I’m ready to tell them that I am going to quit I feel this guilt and shame (even if I actually understand that it’s irrational) for what would it be if I leave my worship team on their own. Maybe some of you already been in my situation, maybe you could share links to some videos or text testimonies of those who been. I would appreciate any help..