The Best Diet for Rheumatoid Arthritis 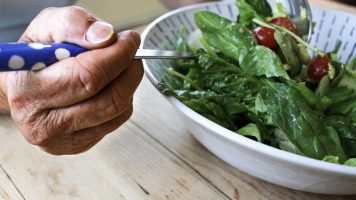 Rheumatoid arthritis is a chronic systemic autoimmune disease affecting millions. It is characterized by persistent pain, stiffness, and progressive joint destruction leading to crippling deformities, particularly in the hands and feet. What can we do to prevent and treat it?

In my video Why Do Plant-Based Diets Help Rheumatoid Arthritis?, I show a famous 13-month randomized controlled trial of plant-based diets for rheumatoid arthritis where patients were put on a vegan diet for three and a half months and then switched to an egg-free lactovegetarian diet for the remainder of the study. Compared to the control group (who didn’t change their diet at all), the plant-based group experienced significant improvements starting within weeks. Their morning stiffness improved within the first month, cutting the number of hours they suffered from joint stiffness in half. Their pain level dropped from 5 out of 10 down to less than 3 out of 10. Disability levels dropped, and subjects reported feeling better; they had greater grip strength, fewer tender joints, less tenderness per joint, and less swelling. They also had a drop in inflammatory markers in their blood, such as sedimentation rate, C-reactive protein, and white blood cell count. As a bonus, they lost about 13 pounds and kept most of that weight off throughout the year.

What does diet have to do with joint disease?

Rheumatic fever is caused by strep throat, which is itself caused by a bacterium that has a protein that looks an awful lot like a protein in our heart. When our immune system attacks the strep bacteria, it also attacks our heart valves, triggering an autoimmune attack by “molecular mimicry.” The protein on the strep bacteria is mimicking a protein in our heart, so our body gets confused and attacks both. That’s why it’s critical to treat strep throat early to prevent our heart from getting caught in the crossfire.

Researchers figured that rheumatoid arthritis might be triggered by an infection as well. A clue to where to start looking was the fact that women seem to get it three times more frequently than men. What type of infection do women get more than men? Urinary tract infections (UTIs). So researchers started testing the urine of rheumatoid arthritis sufferers and, lo and behold, found a bacterium called Proteus mirabilis. Not enough to cause symptoms of a UTI, but enough to trigger an immune response. And indeed, there’s a molecule in the bacterium that looks an awful lot like one of the molecules in our joints.

The theory is that anti-Proteus antibodies against the bacterial molecule may inadvertently damage our own joint tissues, leading eventually to joint destruction. Therefore, interventions to remove this bacteria from the bodies of patients, with consequent reduction of antibodies against the organism, should lead to a decrease in inflammation.

As we saw in my video Avoiding Chicken to Avoid Bladder Infections, urinary tract infections originate from the fecal flora. The bacteria crawl up from the rectum into the bladder. How might we change the bugs in our colons? By changing our diet.

Some of the first studies published more than 20 years ago to fundamentally shift people’s gut flora were done using raw vegan diets, figuring that’s about as fundamental a shift from the standard Western diet as possible. Indeed, within days researchers could significantly change subjects’ gut flora. When researchers put rheumatoid arthritis sufferers on that kind of diet, they experienced relief, and the greatest improvements were linked to greatest changes in gut flora. The diet was considered so intolerable, though, that half the patients couldn’t take it and dropped out, perhaps because they were trying to feed people things like “buckwheat-beetroot cutlets” buttered with a spread made out of almonds and fermented cucumber juice.

Thankfully, regular vegetarian and vegan diets work too, changing the intestinal flora and improving rheumatoid arthritis. However, we didn’t specifically have confirmation that plant-based diets brought down anti-Proteus antibodies until 2014. Subjects that responded to the plant-based diet showed a significant drop in anti-Proteus mirabilis antibodies compared to the control group. Maybe it just dropped immune responses across the board? No, antibody levels against other bugs remained the same, so the assumption is that the plant-based diet reduced urinary or gut levels of the bacteria.

A shift from an omnivorous to a vegetarian diet has a profound influence on the composition of urine as well. For example, those eating plant-based had higher levels of lignans in their urine. Up until now, it was thought that they only protected people from getting cancer, but we now know lignans can also have antimicrobial properties. Perhaps they help clear Proteus mirabilis from the system. Either way, these data suggest a new type of therapy for the management of rheumatoid arthritis: anti-Proteus measures including plant-based diets.

I have to admit I had never even heard of Proteus mirabilis. That’s why I love doing work—I learn as much as you do!

I explored another unconventional theory as to why plant-based diets are so successful in treating inflammatory arthritis in Potassium and Autoimmune Disease.

I have a bunch of videos on gut flora—the microbiome. They include:

Microbiome: The Inside Story
Prebiotics: Tending our Inner Garden
What’s your Gut Microbiome Enterotype?
How to Change your Enterotype
Gut Microbiome – Strike It Rich with Whole Grains
How to Develop a Healthy Gut Ecosystem

Image Credit: Sally Plank / Flickr. This image has been modified.